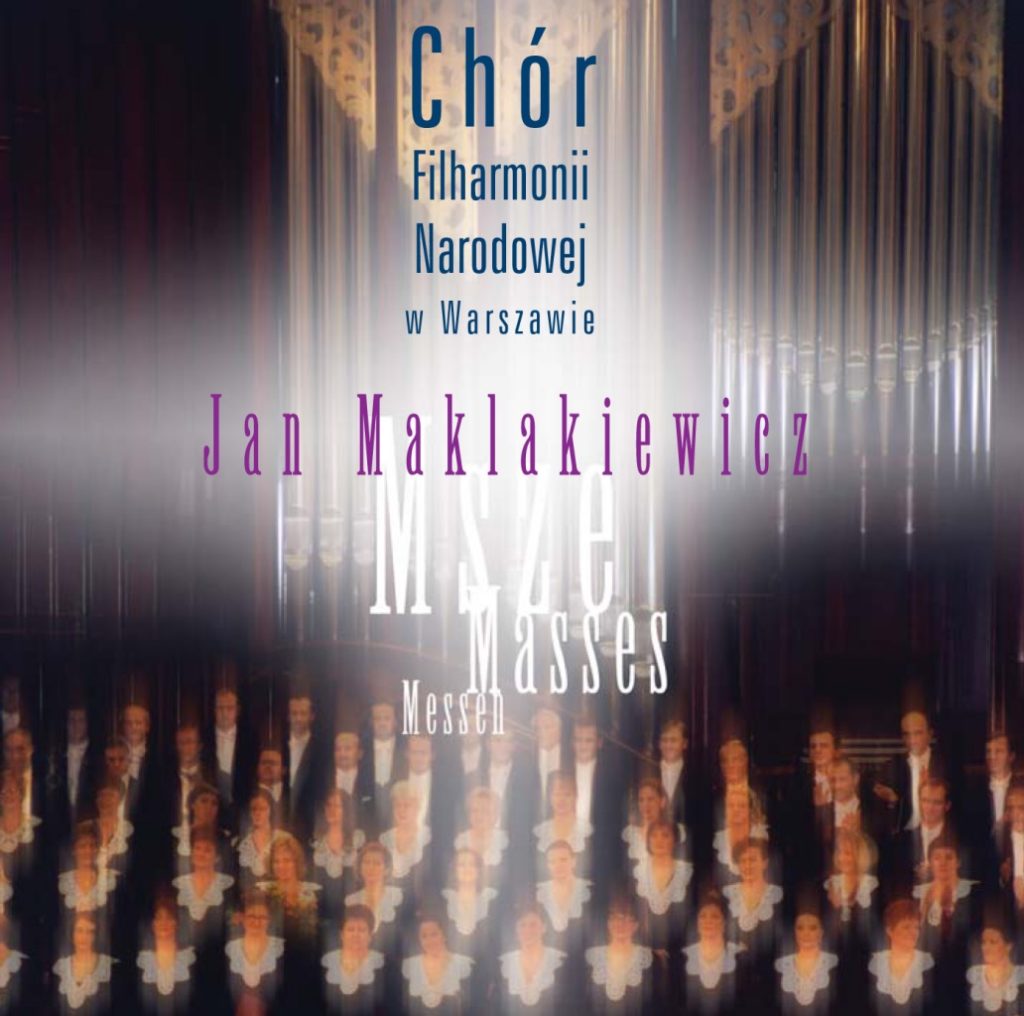 Maklakiewicz´s output includes 6 complete cycles of Ordinarium Missae. Two of them – Missa pro defunctis (1932) and Missa de inventione Sanctae Crucis – Missa secunda (1932) – are intended for a male choir and organ. The remaining four, included in this album, are: Świętokrzyska Mass, Missa tertia in honorem sancti Francisci Confessoris, Missa quarta in honorem Beatae Mariae Virginis – “Częstochowska” as well as the Polish Mass. They were written for a mixed choir and organ, occasionally with one or two solo voices.

The Świętokrzyska Mass (1932) is the first of Maklakiewicz´s three masses with Latin liturgical text intended for a mixed choir and organ. The name refers to the above-mentioned St Cross Church in Warsaw. The piece was composed to commemorate the 250th anniversary of the construction of the temple (1682) and dedicated to the local missionaries.

Unusually joyful, the mass retains its sacral character and is an example of applied art adjusted both to the requirements of liturgy and to the limited capabilities of amateur choirs. It is based on the identical rhythm in all the voices. Any variety in terms of texture and sound comes from the juxtaposition of the four-voice choir tutti and the monophonic fragments sung solo or by the whole group in unison. Although the whole liturgical text was used, the particular parts remain unusually compact in form. In the case of Credo the same effect is due to the numerous fragments sung as recitatives.

The Świętokrzyska Mass was the most popular of Maklakiewicz´s Latin masses. It was published in 1933 in Warsaw by the Feliks Grąbczewski Music Bookshop.

Missa tertia in honorem sancti Francisci Confessoris for a four-voice mixed choir and organ was composed in the autumn of 1940 to commemorate both Saint Francis of Assisi and Maklakiewicz´s younger brother, Franciszek Maklakiewicz-Izdebski (b.1915), a remarkably talented composer and a student at the Warsaw Conservatory who fought in September 1939 and died of wounds.

In terms of the musical language and form this mass resembles the previous work. The author himself describes it as “modest and of simple texture but great emotionality”. The prevailing mood is seriousness and seep sorrow. Despite the very simple technical means applied here the work is very elaborate and refined. This is evidenced by the inspired melodic style, the beautiful harmony characteristic of Maklakiewicz, the perfectly written organ part and the superb use of contrasts in texture and expression in order to highlight particular content of the liturgical text.The mass was premiered in the parish church in Mszczonów in which Maklakiewicz´s father was an organist. The composer himself rehearsed it with the church choir and conducted the performance.

Missa quarta in honorem Beatae Mariae Virginis – “Częstochowska” was created in September 1942. It was intended to cheer Poles up a little and help them survive the Nazi occupation. The text is strictly liturgical and comes in Latin but the music sounds very Polish. The title refers to the well-known Polish bugle call which appears first in the organ introduction and then in the choir part, thus becoming the main motive for the extreme movements of Kyrie. The motive can also be heard in other parts of the mass and plays an integrative role.

The highly original part of the Częstochowska Mass is Gloria with some fragments in the rhythm of the brisk mazur (Et in terra pax), kujawiak (Gratias agimus tibi) or oberek (Quoniam tu solus). Other Polish accents can be found in Credo based on two melodies borrowed from prayers to Saint Mary. The mood of Sanctus is appropriately solemn, and Benedictus is more lyrical owing to the slower pace and the use of the key of E Flat Minor. As in Maklakiewicz´s previous masses, Hosanna in Benedictus is a repetition of the analogous fragment in Sanctus. Built with the use of the counterpoint technique, it is one of the most beautiful fragments in the whole work. The beginning of Agnus Dei is based on the melody of Bogurodzica and creates a majestic mood. The later part (from the words Dona nobis pacem onwards) makes use of the musical material of Kyrie, thus rounding off the composition in the same way it started.

The Polish Mass for solo soprano (or tenor), four-voice mixed choir and organ was composed in January and February 1944. Like the Częstochowska Mass, this one too aimed to raise Poles´ spirits and bring them faith in a speedy liberation. This time the composer decided on a liturgical text in Polish. The Polish Mass consists of six constant parts (Kyrie, Gloria, Credo, Sanctus, Benedictus, Agnus Dei), Offertorium (“Pray, my soul”) and the final Pax, an equivalent of the Latin Dona nobis pacem. The text by Helena Szpyrkówna used in this part is very reflexive and patriotic, and its leading-motive is a prayer for peace.

The Polish Mass is deeply emotional and definitely Polish in character. It is marked by a late-Romantic style, rich harmonic solutions, a dense texture of the organ part and a rich sound of the choir. In very few fragments the four-voice choral arrangement has been replaced by singing in unison or solo. More place for solo voices has been reserved in a fragment of Gloria and in the whole Offertorium. The two-part aria is remarkable for its noble cantilena and lyrical mood.