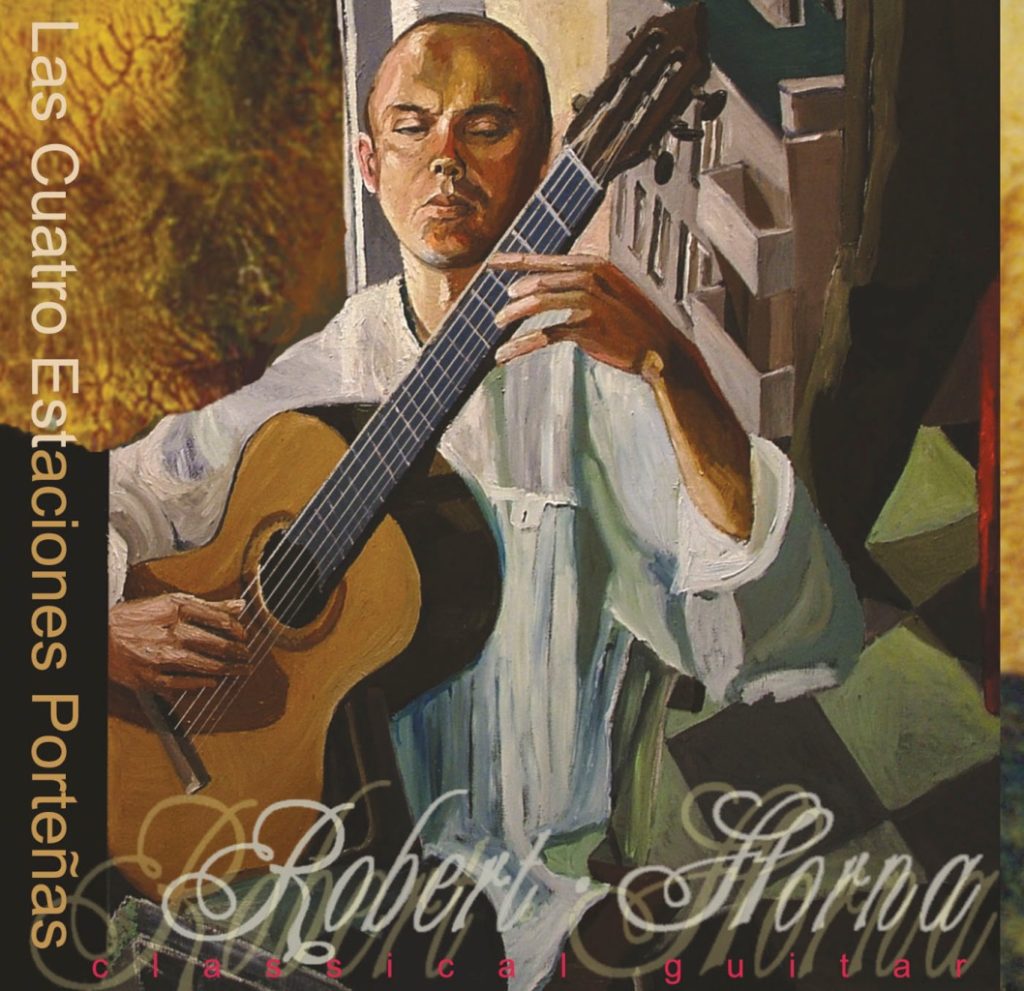 This is the second record by the Polish guitarist, Robert Horna. On his debut album the artist recorded a number of compositions in different styles and from different periods, each played with a youthful passion, enthusiasm, and sensibility. This second disc sums up his recent fascination with 20th century music with its roots in so many cultures. It is an artistic expression of an adult man, a citizen of the world who, as a performing musician, assimilates American, African, Asian and European influences. He filters them all through his personality, allowing the listener to share the joy of communion with the charming, colourful, rich world of sounds from several continents.

In the 90’s Horna was fascinated by the music of the Argentinian genius of Italian descent, Astor Piazzolla (1921-1992), recognized as the creator of the modern tango. Piazzolla successfully transformed a dance initially based on Argentinian folk music traditions into an independent artistic form. It was thanks to him that sublime and refined tangos, much like Chopin’s mazurkas, found their way into the most famous concert halls. The truly beautiful Las Cuatro Estaciones Porteñas (1965-1970) are Piazzolla’s compositions ‘in the colour of the tango’. The title four seasons of the year are in fact a study of various moods of porteñas, the people of Buenos Aires. As such, they are highly symbolic of the spirit of the city and Argentina as a whole. On this record you will hear them in Horna’s transcription based on the original recordings of Piazzolla’s quintet.

The Cuban guitarist and composer Leo Brouwer (b. 1942) draws his artistic inspiration from two sources: the European music of the 20th century and the folklore of West African slaves who were brought to Cuba several centuries ago and who contributed to the development of its national identity. El Decameron Negro (1981) is a three-part work inspired by a collection of African legends compiled, elaborated and published with the same title at the turn of the 19th century by the German scholar and anthropologist, Leo Frobenius. The first part of this musical triptych titled The warrior’s harp refers to a tale which reveals suffering as a necessary component of the creative process. The second part, Lovers’ Escape from the Echo Valley, is an echo of a fascination with Impressionism and the leading instrument of the era – the harp, which the guitar imitates on the album very successfully. The third part, A Ballad for a Girl in Love, is based in its literary content on a legend praising the courage and responsibility for a beloved person. The music of Decameron Negro is incredibly rich in moods. It is both gripping and lyrical, impetuous and passionate, demanding of the artist a superb musical technique and true musical maturity.

The album would not be complete without a Polish item. Horna’s choice here is one of Poland’s most revered composers – Aleksander Tansman (1897-1986) and his most famous and beautiful composition – Cavatina (1951). The work was commissioned by Andrés Segovia and was first performed in 1952 in Buenos Aires. One year later it won first prize from the Accademia Musicale Chigiana, Italy. It was inspired by Tansman’s enduring fascination with Italy. He sought to capture the spirit and mood of Venetian evenings, despite his reluctance to programmatic music. The work is a poetic suite in five movements: Preludio, Sarabande, Scherzino, Barcarole to which after nine years Danza Pomposa was added. A discerning listener will also hear Polish influences in the means of expression, rhythm and harmony of the composition.

Agustín Barrios-Mangoré (1882-1944) was a Paraguayan virtuoso guitarist, composer, theologian and philosopher. He is considered one of the most influential composers in the guitar community. He beautifully joined the influences of the great tradition of European romanticism with those of Latin-American music. He studied under the blind guitarist, Antonio Jiménez Manjón. Unlike most of his contemporaries, he used steel strings and in 1910 made the first commercial guitar recording ever. Barrios-Mangoré was a great admirer of Chopin’s music and this can be heard in his compositions; for many guitarist he is what Chopin is for pianists. Choro da Saudade is a work with a double scordatura in the key of G-minor with a certain nostalgic Latin character and where sorrow is juxtaposed with an ecstatic outburst of euphoria in the key of G-major. Un SueĽo en la Floresta (A Dream in the Forest) is a lyrical composition for highly sensitive artists with a brilliant technique and immaculate tremolo. Interestingly, it contains a sound beyond the scale of the traditional 19-fret guitar.

The final item is an impressive work by the name of Koyunbaba. Written by the Italian composer and guitarist, Carlo Domeniconi (b. 1947), this composition is fraught with rapid, virtuosic passages. It is a free-form work in four movements, each with a unique atmosphere. The common thread throughout the piece is its hypnotic, trance-like character reminiscent of Oriental music. Clearly present here are the traces of the composer’s years spent in Turkey, although Domeniconi claims that his intention was to refer to Mediterranean culture in the broad sense (comprising Greek, Turkish, Italian and Balkan elements). He also confesses that it is a recorded improvisation. The unique sound of the guitar has been achieved here by retuning as many as five strings.

The artist’s choice will not leave the listener unimpressed. The album features a broad spectrum of moods, rhythms, and timbres, ranging from the familiar to the exotic. Given that music in general is a means of conveying emotions, the music selected here abounds in them and its multicultural character makes it shine even more. In the 20th century, marred by the tragic record of pain, oppression, cruelty, Robert Horna seems to have found a certain hope and optimism, an affirmation of life.