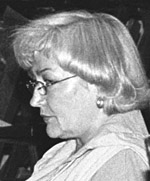 A great Polish singer and star of the most renowned opera houses in the world. She studied at the Gdańsk Academy of Music and made her debut in the title role of Bizet’s Carmen at Baltic Opera where she subsequently sung Dalila in Saint-Saëns Samson et Dalila, Leonora in Donizetti’s La Favorita and leading roles in many Verdi operas. Awards won at vocal competitions in Toulouse (1971), Paris (1972) and `s-Hertogenbosch (1973) paved the way for her international career on which she embarked in 1977, in the role of Amneris in Verdi’s Aida in Basle. She is a regular guest at Vienna’s Staatsoper and is invited by the best opera houses in the world. She sings at the Metropolitan Opera in New York, Covent Garden in London, Teatro San Carlo in Lisbon, Bayerische Staatsoper in Munich, Deutsche Oper in Berlin, Teatro Colón in Buenos Aires, Paris Opera as well as opera houses in Hamburg, Rome, Geneva, Zurich, San Francisco and Houston as well as prestigious concert halls throughout the world. She has won fame for her roles of Amneris, Carmen, Isabella (L’Italiana in Algeri), Azucena (Il Trovatore), Princess Eboli (Don Carlos), Ulrica (Masked Ball), Rosina (Barber of Seville), Dulcinée (Don Quichotte), Laura (La Gioconda), Marina (Boris Godunov) and Marfa (Khovanshchina), a role she sang both in a concert version in Carnegie Hall as well as in a staged production at the Metropolitan Opera. She has partnered among others: Montserrat Caballe, Leontyne Price, Renata Scotto, José Carreras, Placido Domingo, Nicolai Gedda and Luciano Pavarotti. She has sung at many famous music festivals, given concert and oratorio performances and has made CD and Radio recordings. Though she lives permanently in Vienna, she willingly accepts invitations from Polish opera houses and is a frequent guest at the Polish National Opera where she sings Amneris in Aida, Carmen, Princess Eboli in Don Carlos, the Lady Chamberlain in The Haunted Manor and the Deaconess in King Roger. In 1999 she also added lustre to an unforgettable performance of Verdi’s Requiem under the direction of Jacek Kaspszyk.