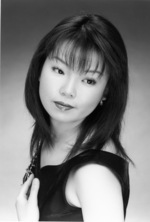 Born in 1980, Rieko Nezu completed her studies in piano at the National University of Fine Arts and Music in Tokyo, under Professors Mieko Harimoto, Akiyoshi Sako and Halina Czerny-Stefanska, subsequently following a postgraduate course at the Academy of Music in Bydgoszcz under Professor Ewa Pobłocka. She has further honed her skills under Katsuko Kaneko, Shoko Sugitani and Dang Thai Son, and also attended masterclasses given by Martha Argerich at the Argerich Music Festival in Beppu, Japan. In competition, she has received First Prize at the KIL International Piano Competition in Sweden (1996), Fourth Prize and Special Award for the best performance of works by Paderewski at the I. J. Paderewski International Piano Competition in Bydgoszcz, Poland (2004), and an Honorary Mention at the Fifteenth International Chopin Piano Competition in Warsaw, where she reached the final. She has given concerts in Japan, Poland and Switzerland, and since 2001 has given recitals in Tokyo as part of the series `Composers around Chopin´, promoted by the Kawai Music Association of Japan. Rieko Nezu has also appeared on the NHK-FM national radio station in Japan.