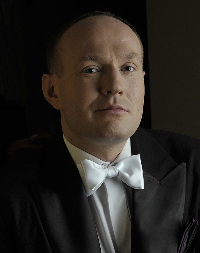 Marcin Grabosz graduated with an honours degree from the University of Music in Wrocław after piano studies with Grzegorz Kurzyński. He also completed conducting studies in the same university after studies with Mieczysław Gawroński. As a pianist, he has given concerts in Poland, Russia, the Nether­lands and Germany. He has presented numerous first performances of works by young composers from Wrocław, among others – Miniatures by Agata Zubel. He is also a successful interpreter of classical and jazz music, an accompanist and conductor. In 2005, he received a special prize for the best accompanist at the 6th edition of the 20th- and 21st-Century Music Competition for Young Performers, organized by the International Society for Contemporary Music, Polish Section.