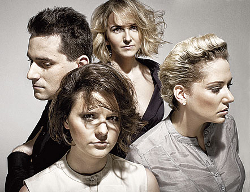 OPiUM String Quartet was founded in 2004 on the initiative of four chamber musicians who graduated from F. Chopin Academy of Music in Warsaw. Towards the end of their course of study, they made up their minds to set up an ensemble. It was only through their own work and determination that they could ever dream of entering the music market.
The Quartet made its debut just several months after its inception, during the Jerzy Waldorff Summer Festival in Radziejowice, meeting with a very warm reception and favourable reviews:
The young artists showed their best on the concert stage in Radziejowice. They already have quite a good technique, and they understand each other very well within the quartet. The host reminded the audience that only a week ago the famous Silesian Quartet had given a concert there; he wished the new quartet similar successes.
After all, the name OPiUM is a telling one. It could be opium for the audience. Since it worked in Radziejowice, it should also work on other stages. And so, we have seen a highly successful debut.
The Quartet’s repertoire goes beyond classical music. The four musicians are fond of working with jazzmen and actors, such as Tomasz Stańko, Jerzy Zelnik, Teresa Budzisz-Krzyżanowska and Anna Seniuk. These encounters result not only in joint recordings, concerts and festival performances (a cycle of recordings for the National Theatre in Warsaw, the Chopiniana Festival, the International Forte-Piano Festival of Stars in Toruń), but, most importantly, allow the Quartet to co-create unique artistic projects. It should be mentioned here that one of the Quartet’s favourite preoccupations is original concert programming (based on scenarios by Magdalena Małecka). They have devised such programmes as Musica a la Polacca – focusing on Polish music, Tango Therapy – an audiovisual project based on tangos by Astor Piazzolla, The Cross – A Tree in Blossom – a Passion programme intertwining music with religious poetry, from medieval to contemporary.
The Quartet’s artistic activity to date demonstrates not only its wide range of interests, but also – its creative attitude to the presented musical material. The Quartet’s name refers to the ideas of creating and following their own paths in music space: it is a combination of the words Opus and Universum. However, since music and art in general can be a kind of drug for both artists and their audiences, the name OPiUM can also be understood differently…