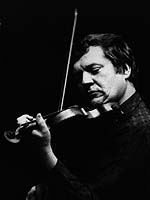 KONSTANTY ANDRZEJ KULKA was born on 5 March 1947 in Gdańsk. At the age of eight and a half he began taking violin lessons with Ludwik Gbiorczyk. During his musical studies at the Secondary School of Music and High School of Music in Gdańsk, from which he graduated in 1971 with top honours, he worked under the guidance of Professor Stefan Herman. In 1966 while still a pupil at the Liceum, he took part in Niccolo` Paganini International Competition in Genova, receiving a diploma with special distinction. In September 1966 he triumphed at the International ARD Music Competition in Munich, which helped to launch his great international career. Since 1967 he performs throughout the world (Europe, Asia, Japan, Australia, North and South America). He has appeared in concert with such orchestras as the Berlin Philharmonic, Chicago Symphony, Minneapolis Symphony, London Symphony, Leningrad Philharmonic, Concertgebouw, English Chamber Orchestra and others. He has performed at many music festivals, among others in Lucerne, Bordeaux, Berlin, Brighton, Prague, Barcelona, Flanders and Warsaw. In 1970 he participated in the great music festival in Bonn, to commemorate the 200th anniversary of the birth of Ludwig van Beethoven. He has recorded for many companies as well as for radio and television. His numerous recordings include: Concertos by Vivaldi (The Four Seasons), Mozart, Mendelssohn, Glazunov, Lalo (Symphonie Espagnol), Bartók, Prokofiev, Beethoven, Brahms (Concerto in D major and Double Concerto ), Karłowicz, Penderecki, Perkowski, Hindemith and Szymanowski (1 & 2); Sonatas by Tartini, Bach, Brahms, Franck, Bartók, Debussy and Beethoven; and virtuoso pieces by Paganini, Wieniawski, Ernst, Tchaikovsky, Ysay..e and other composers. For many years he worked in collaboration with the pianist Jerzy Marchwiński and together with the violist, Stefan Kamasa and cellist Roman Jabłoński was a member of a piano quartet “Kwartet Mistrzów” (The Maestro Quartet), which also has to its credit a long list of recordings headed by Brahms’s Quartet in A Major. He has also made several recordings of contemporary music (Penderecki, Lutosławski, Knapik, Bloch, Jabłoński). His recording of the complete violin works by Karol Szymanowski was awarded a special prize from Polish Radio and Television, while his recording of Szymanowski’s two Violin Concertos received the Grand Prix du Disque in Paris (1981). Konstany Andrzej Kulka is a great exponent of Polish music, performing abroad many works by Polish composers. He was the first to follow Isaac Stern in giving numerous performances throughout Europe and America of Krzysztof Penderecki’s Violin Concerto, under the baton of the composer. He tours extensively with many Polish orchestras (National Philharmonic, Polish National Radio Orchestra and the Philharmo- nics of Kraków, Łódź, Poznań, Wrocław, Gdańsk and Śląsk), and since 1984 is a regular guest of the National Philharmonic, with which orchestra he has toured the world many times, first under the baton of Witold Rowicki and in recent years Kazimierz Kord. He also sits on the jury of many intermational violin competitions.