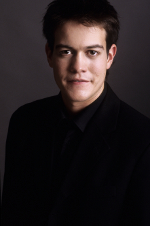 Described by „The Daily Telegraph” as ‘in a class of his own’, he has been the prize-winner of the Wigmore Hall/Kohn Foundation Song Competition, Das Lied – International Song Competition (in both 2009 & 2011), Kathleen Ferrier and Richard Tauber Competitions. He was selected for representation by Young Classical Artists Trust (YCAT) in 2010 and in 2012 received a Borletti-Buitoni Trust Fellowship and a Geoffrey Parsons Award.
James has given solo and chamber recitals throughout Europe and further afield and regularly records for BBC Radio 3. He collaborates with a wide range of singers and instrumentalists, such as Lawrence Power, Mark Padmore, Sir Thomas Allen, Katherine Broderick, Annette Dasch, Dame Kiri Te Kanawa, Pumeza Matshikiza, Ben Johnson, Allan Clayton, Gerard Collett, Marcus Farnsworth, Jared Holt, Eri Nakamura, Catherine Wyn-Rogers, Jacques Imbrailo, Sarah-Jane Brandon, Kishani Jayasinghe and the Elias and Heath Quartets. Festivals and venues have included Wigmore Hall, Bridgewater Hall, National Concert Hall Dublin, Bergen International Festival (Festspillene i Bergen), Spitalfields, Aldeburgh, Aix-en-Provence, Derry and Norfolk & Norwich Festivals. Over the last year he has given recitals at Wigmore Hall, St John’s Smith Square, the Berlin Konzerthaus, Musikverein, the Brighton, St Magnus, Belfast, Cheltenham and City of London Festivals. As a soloist he made his debut in the Nottingham and Leeds International Series and appeared with the Ulster Orchestra (broadcast by BBC Radio 3).
An experienced coach, he has worked regularly at the Georg Solti Accademia di Bel Canto in Italy (with Mirella Freni and Leo Nucci), was a repertory professor for the Encuentro de Música y Academia de Santander in Spain, and continues to coach for the Jette Parker Young Artists Programme at the Royal Opera House. He is an alumnus of the Britten–Pears Young Artist Programme, a scholar for the Samling Foundation, has participated in the European Liedforum in Berlin and in 2011 worked with Gerhard Schulz at the International Musicians Seminar Prussia Cove. His CD recordings include Vocalise with Adam Walker for Opus Arte, and the Britten The Canticles with Ben Johnson for Signum Classics.
In 2013 he curated a series based around Poulenc & Hahn at the Brighton Festival, appeared at the Bath International Festival, performed a Mozart Concerto with the English Chamber Orchestra at the Royal Festival Hall and was resident at the Verbier Festival. Engagements this season include recitals at Wigmore Hall with Lisa Milne, Sophie Bevan, Ian Bostridge, Ailish Tynan, Mark Padmore and Adam Walker and recordings for BBC Radio 3 with Ben Johnson and Robin Tritschler.
Born in South Africa, James studied at the University of Cape Town and the Royal Academy of Music in London with Michael Dussek, Malcolm Martineau and Kathryn Stott. In 2007 he graduated with a DipRAM and received the Christian Carpenter Award in recognition of his outstanding achievements. He was appointed a Hodgson Junior Fellow during the 2007/2008 season, a Professor of Piano Accompaniment in 2011, and awarded an ARAM (Honorary Associate of the Royal Academy of Music) in 2012.