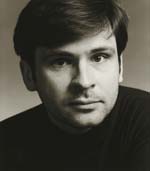 Andrzej Bauer, winner of the 1992 „ARD-Wettbewerb” (Munich Radio and Television Competition), was born in Lodz (Poland). He studied at the Academy of Music in his hometown under the guidance of Kazimierz Michalik and continued his studies by attending masterclasses of Miloą Sadlo, Daniel Shafran and André Navarra. From 1987 to 1989 he was pupil of William Pleeth in London obtaining a scholarship granted by Witold Lutosławski. Andrzej Bauer has won several awards: at the National Polish Cello Competition in 1983 and at the „Prague Spring” Cello Competition in 1989 and has also received the prize of the European Community Parliament in 1990.Since 1989 Andrzej Bauer gives recitals, plays with chamber and symphony orchestras and takes part in various chamber music projects throghuout the world receiving acclaim of audiences and international press.Among Andrzej Bauer`s records a CD with works of Schubert, Schumann, Brahms and Mendelssohn (Koch/Schwann 1993) has received the quarterly Prize of the GermanMusic Journalists („Preis der Deutschen Schallplattenkritik”).On other CDs the artist recorded music by Prokofiev, Shostakovitch, Stravinsky (Koch/Schwann), Lutosławski (Naxos) and complete Suites for cello solo of J. S. Bach (CD Accord).