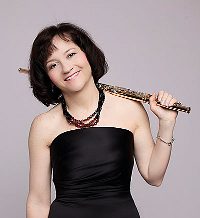 Her flute education began in the Henryk Wieniawski State Secondary School of Music in Łódź, in the class taught by Antoni Wierzbiński, with whom she also later studied in the Academy of Music in Łódź, graduating with a distinction in 1984. She further developed her abilities in the Paris Conservatory with Alain Marion, who funded a one-year scholarship for her as an award in the International Jean-Pierre Rampal Flute Competition in Paris. She continued her studies in Paris for another year as a French government scholarship holder, also participating in this period in master classes in Nice (with Alain Marion), Bayreuth (with Milan Munclinger) and Duszniki (with Jerzy Mrozik).

Directly after her studies, the artist became the flute section leader and soloist in the Polish Chamber Orchestra (now – the Sinfonia Varsovia). Urszula Janik’s artistic personality developed through collaboration, as part of her work in the orchestra, with the greatest musical personalities of our time, such as Martha Argerich, Charles Dutoit, Sir James Galway, Irena Grafenauer, Leopold Hager, Mischa Maisky, Anne-Sophie Mutter, Krzysztof Penderecki, Jean-Pierre Rampal, and Mstislav Rostropovich. A special place among the musicians performing with the orchestra was occupied by Yehudi Menuhin, under whose baton she also played as a soloist.

Urszula Janik has performed with numerous other symphony orchestras in Poland, and throughout Europe as a soloist with the Sinfonia Varsovia. Her debut took place in Warsaw Philharmonic, where she played the solo flute part in Andrzej Panufnik’s Sinfonia concertante under the baton of Jerzy Katlewicz. She also recorded the same work with the Great Symphony Orchestra of the Polish Radio and Television, alongside other compositions recorded for the Polish Radio and Television archive. She took part in a recording project, released on CD in March 2002, featuring chamber music by Claude Debussy, Jacques Ibert, Maurice Ravel and Albert Roussel.

Since January 2002, Urszula Janik has been the flute section leader and soloist in
Warsaw Philharmonic Symphony Orchestra.

Since October 2002, she has taught a flute class in the Grażyna and Kiejstut Bacewicz Academy of Music in Łódź. She also conducts numerous flute master classes and workshops, e.g. in Nowy Sącz and Sarbinów. She serves on the juries of national flute competitions and auditions. In May 2010 she was invited to perform and hold flute workshops at the 8th International Flute Festival in Slovenia, alongside such stars of flute music as Peter-Lukas Graf and Emmanuel Pahud.