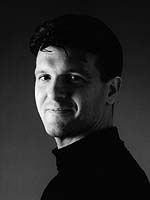 In 1989 he graduated from the Warsaw Academy of Music, where he studied cello with K. Michalik and where he has been assistant professor since 1993. He continued his studies with T. Kühne at the Hochschule für Musik and Darstellende Kunst in Vienna. He has also attended master classes in Weimar, Lancut and Warsaw with T.Kühne, M.Sadlo, D. Szafran and R. Jablonski. At the age of 17 he won prizes in several major competitions, such as the Competition for Young Talents in Dresden and the All-Polish Danczowski Cello Competition in Poznan. In 1987 he won first prize in the Academic Cello Competition in Warsaw. In 1991 he won the 5th International Zabaleta Music Competition in San Sebastian (Spain). Tomasz Strahl collaborates with many philharmonics at home and with the chamber orchestra Concerto Avenna. He has worked with many Polish and foreign conductors. In Brahms’s double concerto he is the partner of the distinguished Polish violinist Krzysztof Jakowicz. He has made many recordings for Polish Radio and Television. He has appeared in concert in Finland, Switzerland, Germany, The Czech Republic, Ukraine, Belarus, Austria, Spain and Kuwait. An important event for the artist was the performance of Lutoslawski’s Cello Concerto under J. Blaszczyk in the presence of the composer in October 1993. In 1994 Pony Canyon (Japan) released a CD album with T. Strahl’s interpretation of Chopin cello works. In the same year he made his debut with the Polish Radio Symphonic Orchestra. In 1995 he made a successful appearance in the famous Brucknerhaus in Linz (Austria). In 1996 his next album was released by Pavane Records. Tomasz Strahl is the recipient of a scholarship from the Japanese Fund for the Promotion of Musical Culture (JESC). He teaches numerous master classes in Germany, the Netherlands and Finland.