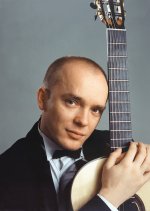 Robert Horna – born in Koło, Poland, in 1972. Robert Horna studied at the State School of Music of Konin with mgr Andrzej Majewski, at the Academy of Music of Wrocław in Poland with Prof. Piotr Zaleski and at the Conservatory of Music of Enschede in The Netherlands with Louis Ignatius Gall.

His repertoire consists of works from the Renaissance to present day music. He has special interest in pieces of Spanish and Latin American composers.He has given solo recitals and performed with orchestras in Switzerland, Germany, Belgium, The Netherlands (Royal Concertgebouw in Amsterdam) and Poland.

He perfected his skills at master classes given by famous guitarists and teachers as Ida Polk, Yves Storms, Reinbert Evers, Gerard Reichenbach Sérgio & Odair Assad and Michael Tröster. Robert Horna performs not only solo recitals, but also with various orchestras and chamber ensembles (guitar with flute, violin, accordion, voice). Since two years he has played with Dutch clarinet player Ingrid Soeten. Following this he has made recordings for the radio and tv.

He is the prize winner of several awards: