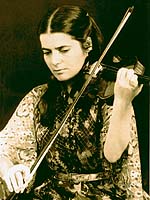 One of the most outstanding Polish artists. Very talented and unusually hardworking, she started playing the violin at age 7 and two years later won her first prize at a national violin competition in Wroclaw. From then till her graduation with honours from the Krakow Academy of Music she studied with Prof. Eugenia Uminska. She also attended master classes with David Oistrakh and Ruggiero Ricci. She has won prizes in many national and international competitions (e.g. in Poznan (the Wieniawski Competition), Naples, Geneva, Munich, Brussels). In 1970 she was awarded the United Nations Gold Medal. She has been giving concerts since she was nine and has performed in nearly all European countries, the USA, Canada, Mexico, Venezuela, Australia and Japan. She has played at numerous international festivals and recorded extensively. She currently teaches at the Krakow Academy of Music.