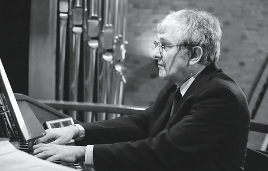 Julian Gembalski graduated from the State Higher Music School (now the Academy of Music) in Katowice: from the Instrumental Department in the organ class of Henryk Klaja and from the Composition, Conducting and Music Theory Department, with the specialization in Music Theory (both achieved with distinction in 1975). He took part in a master class with Flor Peeters in Mechelen (Belgium) and finished further studies in Paris with André Isoir and Michel Chapuis (organ) and Jean Saint-Arroman (musicology). He is active as artist, researcher and teacher, playing all over Europe and the US, recording for Polish Radio (e.g. “Anthology of Organs in Upper Silesia” with the recording of over 90 instruments) and TV. He has recorded over 40 CDs, including seven with the soprano Elżbieta Grodzka-Łopuszyńska. He is the winner of piano improvisation competitions in Gdańsk and Nowa Ruda, as well as an organ improvisation competition in Weimar, holding also the Orpheus Prize at the 38th Warsaw Autumn Festival, the Wojciech Korfanty Prize, the Pope John Paul II medal “Pro Ecclesia et Pontifice”, the title of The Silesian Man of the Year. He is the author of numerous papers about the history of organ building in Silesia, the problems of the conservation of historical instruments, as well as the designer of new organs. He is a professor of the Karol Szymanowski Academy of Music in Katowice where he teaches organ and directs the Organ and Church Music Faculty. Between 1996 and 2002, he was also a rector of this school. He has been also for many years the Supervisor of organs and organists of the Archdiocese of Katowice. In 2004, he founded the Organ Museum in Katowice, the first of its kind in Central Europe.