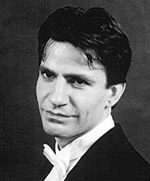 Graduate of the School of Choral Music founded in Poznań by Jerzy Kurczewski, and of vocal studies at Poznań’s Academy of Music where he studied under Antonina Kawecka (1996). He made his debut as Malatesta in Donizetti’s Don Pasquale at Wrocław Opera where during the next few years he sang the title role in Mozart’s Marriage of Figaro and Papageno in his Magic Flute, Maciej in Moniuszko’s The Haunted Manor, Oroz in Paderewski’s Manru, Count Ottokar in Weber’s Freischütz and Angelotti in Puccini’s Tosca. He also appeared with Wrocław Opera in Belgium, the Netherlands, Luxembourg, Germany and Great Britain. Since 2001 his singing coach is Paolo Montarsolo. He has made guest appearances at the Opera Nova in Bydgoszcz as Escamillo in Bizet’s Carmen. He has participated at music festivals: Wratislavia Cantans, Poznań Spring and the Śląsk ‘Understanding’ Festival, and has sung solo parts in Bach’s St. John’s Passion and Mozart’s Coronation Mass and Requiem. He made his debut at the Polish National Opera in 2002 as Golaud in Debussy’s Pelléas et Mélisande and also sings the roles of Baron di Trombonok in Rossini’s Il viaggio a Reims.