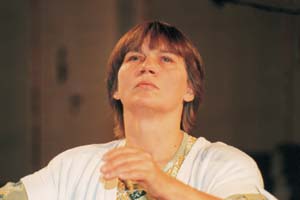 She comes from a family with musical traditions. In 1966-1971 she studied conducting at the Poznan Academy of Music with Prof. Witold Krzeminski and graduated with honours. She next worked as an assistant conductor at the Poznan National Philharmonic where she premiered Britten’s A Midsummer Night’s Dream. In 1968, still as a student, she founded a chamber orchestra transformed in 1977 into the Polish Radio and Television Chamber Orchestra (since 1988 under the name of ‘Amadeus’). Since its foundation she has been its managing and artistic director.

In 1970 Agnieszka Duczmal won the 1st All-Polish Conducting Competition. In 1975 she received an honourable mention in the 4th Herbert von Karajan International Conducting Competition in West Berlin. A year later she won a silver medal at the International Meetings of Young Orchestras in West Berlin. In 1982 she received La Donna del Monde Award from the Saint Vincent International Centre of Culture (under the patronage of UNESCO and President of Italy) for outstanding achievements in the field of cultural, scientific and social activity. Agnieszka Duczmal conducts symphonic orchestras at home and abroad. She has been the first woman conductor at La Scala. Together with her chamber orchestra Amadeus she records and travels a great deal. She also popularizes music in her own television programs.