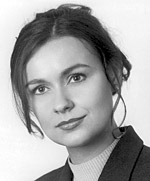 A graduate of the Warsaw Academy of Music where she studied under Halina Słonicka, later taking master classes with Teresa Żylis-Gara, Hanna Lisowska, Alexandrina Milcheva, Ryszard Karczykowski and Kałudi Kałudov. Prize winner of the French Song Competition in Nidzica (1st Prize, 1990) and the International Competition of Polish Art Song in Warsaw (3rd Prize and Special Award, 1996). Between 1997-99 she collaborated with Wanda Warska and Andrzej Kurylewicz’s ‘Arts Cellar’ and appeared on the boards of the National Theatre in performances of Saragossa (1998) and Halka-Spinoza (1999). Since 2002 she is a soloist of the Warsaw Chamber Opera where she made her debut as Vittelia in Mozart’s La Clemenza di Tito. Her repertoire includes Micaëla in Bizet’s Carmen, Adina in Donizetti’s L’elisir d’amore, the Countess in Mozart’s Marriage of Figaro, Musetta in Puccini’s La Boheme and the title role in Purcell’s Dido and Aeneas. Her oratorio and cantata repertoire includes soprano parts in works by Bach (Magnificat), Beethoven (Symphony No. 9), Handel (Messiah), Mozart (Requiem, Mass in C major), Pergolesi (Stabat Mater), Schubert (Mass in G major) and songs by Lutosławski, Poulenc and Szymanowski. For Polish Radio she has recorded works by contemporary Polish composers: Jacek Grudzień and Marian Sawa. She also accompanied Kałudi Kałudov in his recording entitled Ave Maria. She made her debut at the Polish National Opera as Madama Cortese in Rossini’s Il viaggio a Reims.