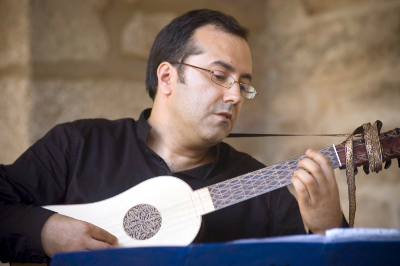 Began his musical training as a child singer in the choristers’ school of the Cathedral of Santiago de Compostela. He specialised in ancient plucked string instruments at the Conservatory of Toulouse (France) and at the Staatliche Hochschule für Musik in Trossingen (Germany) with Rolf Lislevand. As an instrumentalist he is intensely involved in concerts and recordings as a solo performer or accompanist throughout all of Europe. He has also composed and conducted music for a series of theatrical works, and has published several articles on ancient music, music guides and CD books. He has offered numerous seminars, courses and conferences in different universities and teaching centers throughout Europe. He is the founder and conductor of Resonet, early music ensemble formed in Santiago de Compostela in 1990. The group has performed numerous concerts in leading festivals and auditoria throughout Europe, focusing on music connected with Galicia and the Way of St. James. It has recorded La Grande Chanson: French pilgrims’ songs from the seventeenth century; ¡Santiago!: music and pilgrimages in the Renaissance; Les Pellerines: the fashion of pilgrimage in seventeenth-century France; Il Pellegrino: the journey of Cosimo III de Medici,1668; Canto de nadal; Cantares Galegos-Rosalía de Castro; Canto de Ultreia: Codex Calixtinus-Pilgrims’ Songs: Music for the festivities of St. James-twelfth century; Festa Dies, Consecration of the Cathedral of Santiago de Compostela, 1211; and A Peregrina (The pilgrim Lady) songs and romances in the ways of Santiago.
With Mercedes Hernandez he has recorded Tonos de Amor with José Marín’s songs for voice and guitar, 17th. century. In 2014 he released a CD entitled Viaxe a Compostela (A Journey to Compostela) devoted to the European solo repertoire for ancient plucked string instruments from the Renaissance and Baroque periods.